An Evening of Cooperatives and a Half

Surviving a civil war has a way of making a person focus on the present. Putting in a solid day of work and taking time with family tend to come before putting items on an agenda for a board meeting, even if one owns the company.

Most of the 30 workers at Brookline-based A Yard and a Half Landscaping, who have chosen to take ownership of their company and transform it into a cooperative, are immigrants from El Salvador. From 1980 to 1992, El Salvador endured a civil war in which 80,000 people died—more than two percent of the population—including many, many noncombatants, most killed by the US- and oligarch-backed anti-Communist military government. The violence still echoes.

The Yard and a Half landscapers are laying a new path of owning and managing the company themselves. To do so successfully, they must cultivate a culture of involvement in decision-making. Carolyn Edsell-Vetter is the first CEO and President of A Yard and a Half Landscaping Cooperative after its transition from ownership by its founder. Carolyn, who was the featured speaker at the Boston worker coop meetup on November 17, is determined to work herself out of presidency of the board. Along with ownership, all worker-owners must take on more leadership roles, including board officerships (all worker-owners are already on the board of directors).

For many at the meetup, the challenges Carolyn recounted about making a cooperative work matched experiences of our own, even though none of the rest of us were part of a transition from a non-coop company. Indeed, those of us in and out of cooperatives found much to discuss, from democracy to dollars. 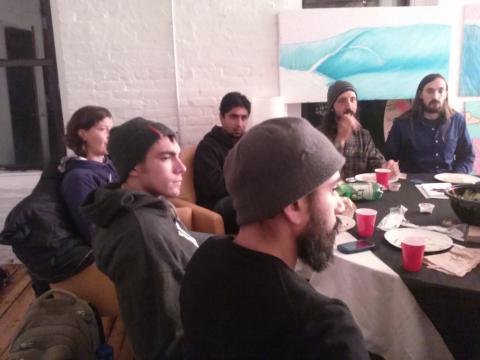 How we talk about work and other things in worker-owned cooperatives was itself a topic of interest. Part of this is treating everyone with respect and trying to remove oppressive language, words and phrases or statements that intentionally or unintentionally reinforce racism, sexism, classism, ableism, and gender conformity.

"We spend about 30 minutes a working day working on our language," said James Bachez of Boston Collective Delivery, "and not the lunch hour." Collective organization calls for a "whole new language just beginning to understand." James stood up and paced while he thought and spoke. "Capitalist businesses talk about culture all the time," as something set from the top. Company culture is key for cooperatives too, but it comes from everyone. "The coop develops its culture. It's there. Whatever bubbles up to the top. I feel far more effective as part of a cooperative."

Most agreed that working on communication needs to be a constant, conscious effort. Collaboration, like other skills, should not be left to chance. Carolyn's praise of the for its help with cooperative assistance was echoed by other cooperatives in attendance. Carolyn further thanked the Boston Interpreters Collective for making multilingual workshops possible.

The business of co-owning a business calls for financial literacy for all workers, too. "Everyone needs to know how to read a P&L", said Carolyn, referring to a statement that shows the profit and loss of a business. Used to see and estimate sales and expenses, it is fundamental to understanding any business's financial health.

We talked a great deal about fair compensation and balancing effort and types of work. A Yard and A Half does not have the same pay rate for all workers, and exactly what to pay everyone "has been really contentious. We inherited the wage structure from the previous owner," said Carolyn. They wanted their starting wages to be higher, but now people coming in can get almost as much as a crew leader who has been working for ten years. Either all pay rates have to bump up proportionately, or pay differentials have to flatten and everyone needs to be all right with that. "Thirty-five percent of cost to field labor would make us uncompetitive." 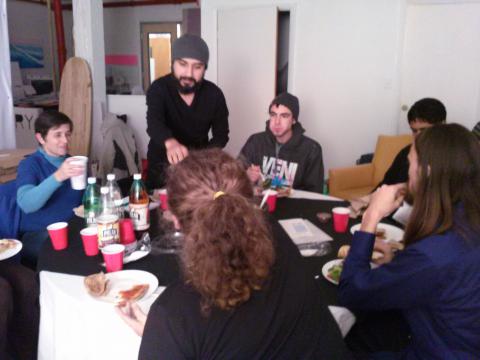 Like Carolyn, most felt there could be fair tiered systems in cooperatives, but no one felt they had one permanent answer. "This is how worker cooperatives reconcile the valuation of our labor in a capitalist system," said James, "while building something new." Most felt equal pay to be a good goal, but also that more experience, more responsibility, or just doing boring work no one else wanted to do could all justify more money. Sharing skills and sharing different kinds of work might be ideal, but isn't always practical and different work can be treated differently to have an overall just outcome. One attendee said she learned in Argentina that retirement age for physical labor is set lower, at 50 years.

Whatever the pay, there's no replacement for enjoying what one does. "Landscaping, you just have to love it," Carolyn said, "to make it through one season. We've had people come to [start their first day of] work and turn in their work clothes at lunch break." For those who like all that physical work, changing landscapes, making things beautiful, are extremely worthwhile.

A final big topic we talked about was hierarchy. A cooperative does not mean you don't have one person in charge of certain domains. Hierarchies help accomplish specific tasks efficiently, but they need not be permanent, and the structure adopted for a specific purpose or project in a cooperative is "a consensual hierarchy".

As interesting as our common ground was, the transition-specific experiences were also fascinating. A Yard and a Half has some great advantages coming from a transition— an established, profitable business and the passed-on wisdom from their founder, including advice which Carolyn said they are just beginning to recognize the truth of: "You either have to grow or you'll lose ground." The clientele is largely friendly to the progressive business that was built and the worker cooperative that it has become: hippies done good, people who want their kids or grandkids to be able to run around on the grass and eat dirt without being poisoned, thanks to a decision to stop using chemical pesticides and adopt organic practices.

Unexpected challenges of A Yard and a Half's transition to a cooperative corporation included having to re-establish the company's credit. Some businesses wanted personal guarantees from all of the owners for debts. They had to discuss and ultimately accept that some worker-owners—with homes and credit cards—were putting more at risk than others.

Transitioning from a hierarchical structure or creating a new worker cooperative both mean learning to self-govern. It is work that all in attendance recognized as hard but affirmed as worthwhile. Worker cooperatives offer control over our own work, increased control over our lives, and the promise of, perhaps, an economic base that can support collective liberty and justice.

A Yard and a Half Landscaping was not the only inspiring worker-owned cooperative we got to learn about that night. Boston Collective Delivery is one of three cooperatives in a fledgling federation that plans to grow, and in five years or so apply to be accepted into Mondragon, the largest federation of worker-owned cooperatives in the world— but we hope to learn and write about more on that later. There's no reason for you to wait if you're anywhere near Boston though! Meetup coordinator Micky Metts, James, many other attendees, and many more look forward to meeting interested people at WORC'N's holiday party this evening at Industry Lab. Join the meetup group for notice of new events or the WORC'N discussion list for discussion of worker cooperatives in the Boston area, including notice of these meetups. 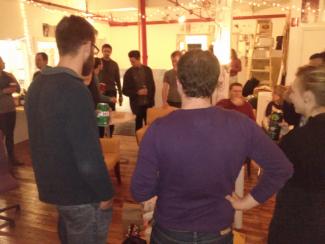 On a cold December night, we met at the Industry Lab to celebrate the Worcn group and our membership in the cooperatives we belong to. 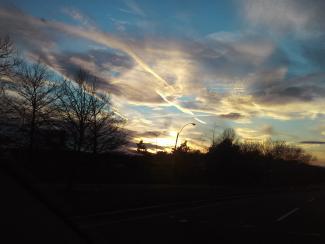 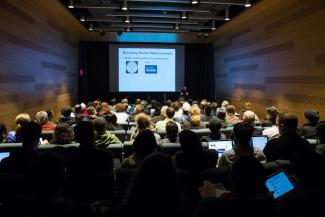 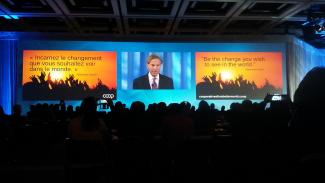 The International Summit of Cooperatives proved that coop movement is international and growing.